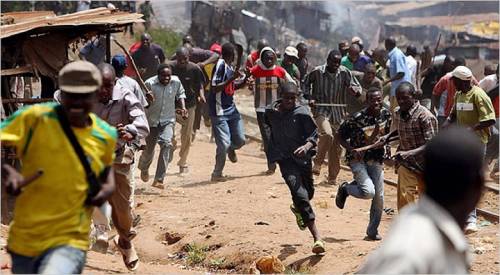 The Southern Kaduna People’s Union (SOKAPU) has condemned the killing of some indigenes of the state by the Fulani militia. In a statement signed by the SOKAPU Spokesman, Luka Binniyat, it reads thus:

“Last night, 33  Atyap natives, who were among hundreds of thousands of already starving indigenes under a 24 hours rigidly imposed curfew that was 65 days yesterday,  were killed in five Atyap villages in Atyap Chiefdom, Zangon Kataf LGA in Southern part of Kaduna state by Fulani militia.

The villages affected are Apiashyim, Kibori, Apiako, Atakmawei, and Magamiya. Prior to now, they were all shut down with fierce armed military men patrolling and enforcing the 24 hours curfew. But when the gunmen struck, they were not on the ground.

Four Atyap youths from Majuju and Kibori villages who went to farm under the curfew were arrested by soldiers after being thoroughly beaten and handed over to the Police who whisked them to SCID, Kaduna. They have been denied bail since 26th June 2020. This trend of brutality has forced our people indoors for nearly two months today.  But Fulani herders have been wandering freely and grazing over large swaths of maize farms of our locked up farmers.

Last night, around 11 pm, trucks loads of armed Fulani militia made their way through military checkpoints under the curfew and stormed Apiashyim and Kibori villages. They lay siege to Apyaishyim killing, looting, and burning houses. In the wake of the cruelty, they left six people dead, and 20 houses burnt.
In nearby Kibori village, 7 persons were killed by the marauding, pampered Fulani militia.

Around 12 am, they struck the Atakmawei sleeping community and carried out another carnage after which 12  persons were killed and ten houses burnt. They also went to Apyiako and killed 3 people, and burnt homes, including the home of late Col. Bobai Ishaku among others. At the same time, Magamiya village was also attacked and 5 people killed and seven houses burnt.

The attacker operated between 11 pm and 4 am this morning before they left unchallenged. According to survivors, the Fulani militia included Fulani youths born and raised in the affected villages. They would come to a compound and shout out the name of the occupants challenging them to come out and face them.

In Apiako, scared villagers who hid under grown maize crops said they saw what looked like an armored military truck pulled up at the village square followed by familiar military motorbikes while the attackers were busy killing, but never made any attempt to stop them.

For the records, we want to say that Governor Nasir el-Rufai of Kaduna state has tied up our law-abiding people under an irrational, protracted curfew which is obviously intended to cause maximum harm to our communities. For example, we are inundated by daily cries for food, medicine, and money, with rising cases of child malnutrition and kwashiorkor as parents cannot go out and look for food for their starving children. The sick are trapped at home. No one wants to risk the brutality of the military that are enforcing the curfew. Even if the curfew is lifted, freely grazing cattle herded by armed Fulani men have eaten up and trampled over thousands of hectares of grain farms, yam farms, sugar cane crops among others. This portends obvious hunger and increased poverty for our communities this year and the next.

We are appealing to the international community, men, and women of conscience all over the world to come to our aide as there is what looks like a government-sponsored genocide against Southern Kaduna Communities.”