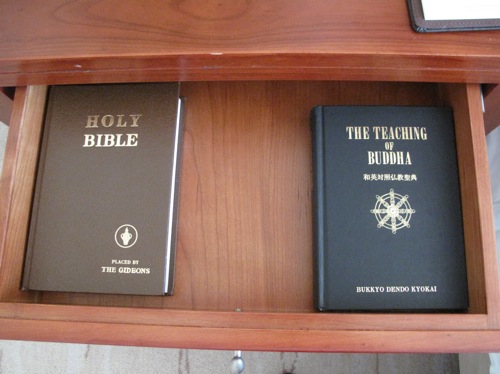 My work as a journalist puts me on airplanes more than a dozen times in twelve months of the year over the last decade. Because I have no homes or friends in most of the cities I’m dropped to do my work, I find abodes in hotels. I have more than a dozen Bibles in my library, which means I could afford not to take a particular Bible with me two times on my journalistic trips in a period of one year. Yet, even when I considered a Bible in my luggage as a burden [though I’ve never felt so] I would not worry. Why? There used to be copies of the Holy Bible in English and French in hotels where I used to lodge. However, in the last three years I began to notice the absence of Bibles in the drawers by the bedside in hotel rooms. I initially saw them conspicuously missing in hotel rooms outside Nigeria – including in God’s Own Country America. But to my astonishment, hotel owners have taken them out in Nigeria as well. It’s like those in the industry have united to remove the Holy Bible from hotel rooms.

My initial thoughts were that it was the wind of the digital era that has blown the Bible out through the windows of hotel rooms. Yes, I have several versions of the Holy Bible in my android phones. But the sense of divine presence that I used to feel when I saw printed versions of the Holy Bible by my bedside was a spiritual value that I cannot derive from having the digital Bible app on my phone. Lodgers in hotels who do not have over a dozen Bibles like I have, and who forget to take the only copy of the Bible [some torn and defaced by their children or overuse] would stay in hotels without an opportunity to read the Word of God over the period they are away from their homes – and Church activities. In this way, they are vulnerable to sinful attacks.

But, as I pondered on this issue, I realised that removing the Bible from hotel rooms  is just one of 10 ways I have noticed that Satan is winning in the battle for the souls of men in this Millennium [post-Christian] Age. I have identified close to a dozen other ways:

Instead of surrendering the world to Satan, Christians of this Age should rise to the challenge of our times

What to do? Instead of surrendering the world to Satan, Christians of this Age should rise to the challenge of our times. In every era in the last 2000 years Christianity has come under diverse challenges, but firebrand, enthusiastic and Charismatic Christians have risen to the challenge to take the kingdom by force.